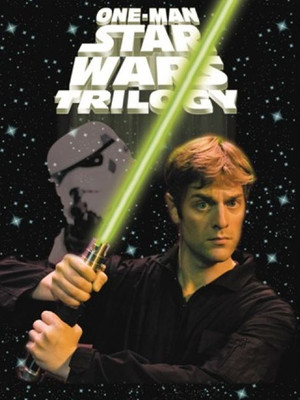 "Funnier than you could possibly imagine!"

Performed over 2,000 times across 180 cities for the past 15 years, Charles Ross has no intention of closing up his hit one-man-show any time soon! One of the few shows accredited by Lucasfilm itself, Ross' off-Broadway hit quickly gained a cult following thanks to his high-spirited and energetic personality, and uncanny ability to perform multiple characters at the drop of a hat. Having traveled the world over, the show returns to the States on a nationwide tour. A must-see event for wannabe-Wookies!

From the sound effects to the score, from Chewbacca to Princess Leia, Charlie Ross recreates the entire Star Wars experience with humor and a few factoids thrown in as well. There are no props, costumes or sets involved, just Ross and his irrepressible humor and obvious fanaticism for all things galaxy (far, far, away) related. And now with the release of yet another sequel (Rogue One) upon us, we don't have to be Yoda to predict that his shows will be in demand for a long time yet!

Suitable for audiences of all ages

Seen One Man Star Wars Trilogy? Loved it? Hated it?

Sound good to you? Share this page on social media and let your friends know about One Man Star Wars Trilogy at Arcada Theater.