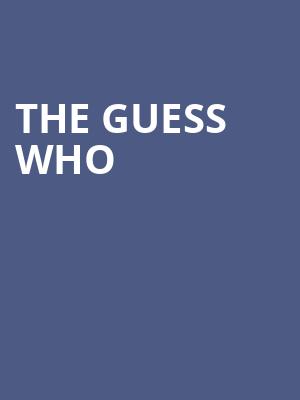 A group that's connected with the masses throughout an exultant hit parade spanning fourteen top 40 hits, including "These Eyes," "Clap For The Wolfman," "Hand Me Down World," "No Time," "Star Baby," and "Share the Land."

Why See The Guess Who?

The Guess Who prepare to hit the road

Canadian rock band The Guess Who were part of the international rock scene during the 1960s and 1970s with hits such as 'No Time,' 'American Woman' and 'Laughing' propelling the band into rock stardom. Forming in Winnipeg in 1965, The Guess Who have gone on to perform far and wide and become one of the first international rock successes from Canada. Catch them on this nationwide tour this year!

The Guess Who have released 16 albums in their time with their 1970 released 'American Woman' being the most popular. The band was inducted into the Canadian Music Hall of Fame in 1987 and received a Juno Award for Group of the Year in 1970.

You may be required to wear a mask during this performance. Please contact the venue directly for more information.

Sound good to you? Share this page on social media and let your friends know about The Guess Who at Arcada Theater.